If you don’t see your favorite listed. Email the FB page information to vegasanimalrescue@gmail.com

The 411 Websites For Vegas Animal Lovers

12th Annual Bark In The Park

Free event for people and pooches of all ages. A day full of entertainment, demonstrations, contests, shopping, services, pet adoptions and plenty of fun!

at The Luxe Pet Hotel  http://www.luxepethotels.com/

The Luxe Hotel is home of the NKLV Adoption Center.

We are looking for wonderful people & businesses to help make our event a success.  This event will help raise funds to care for animals.If you are a rescue, artist, business, or volunteer and you are interested in participating this year please complete one of the forms below.
Pawcasso LV Art Auction 2014 Sponsorship Form – pdf
Pawcasso LV Art Auction 2014 Sponsorship Form – doc
Thank you so much 🙂 pawcassolv@gmail.com

Sammy Shore’s Funny Bones is a live comedy show beginning at 2pm on Sunday, June 1, at The Orleans Showroom in Las Vegas.  This is the remarkably hilarious show everyone was talking about last year!

Tickets are on sale now from The Orleans Box Office! CLICK HERE

You can also buy your tickets in person at Nevada SPCA headquarters.

Funny Bones is made possible thanks to Sammy & Suzanne Shore, The Orleans Hotel & Casino,Desert Productions, The Tailwaggers Club, Hounds of Hope, and many others who are also fully donating their time and talents to support animal rescue.
In addition to the Funny Bones performers, the following celebrities are confirmed for the Red Carpet: singer/dancer Cheaza, TV star Marisela Laguna, TV star Kevin Mack, author Mike Mahler, performer Almas Miermanov, and vocal group MO5AIC.

If you have any ideas for this area please email us at vegasanimal411@gmail.com

Free 1st Visit to our Animal Hospital
http://www.TownCenterVet.com
Here is a tour of our hospital on youtube

Brought to you by

All animal lovers welcome!  This is a family-friendly event, enjoyable for people of all ages. We hope you join us for an incredibly fun afternoon to support animal rescue & rehabilitation!

Confirmed celebrity attendees as of August 5, in alphabetical order:

[Special thanks to Pet’ographique for this inspiring portrait of rescued dogs Lola, Edward, and BJto help promote this fundraiser.] 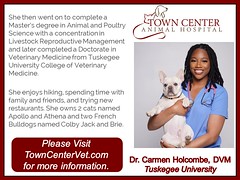